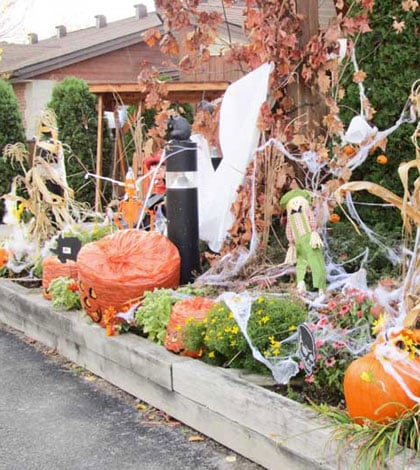 There are a pair of winners, not just one as had been planned: they are Spring Bay and Manitowaning and each community will receive a highway sign to post testifying to their exemplary community spirit.

The harvest themed decorations in and around all of our communities make a fine fit with the spectacular fall colours that are still very much in evidence the length and breadth of Manitoulin Island as this large freshwater island becomes a palate for nature in her fall finery, set off by the blue waters of Lake Huron and the North Channel all set off to the north by the Lacloche Mountain range.

The Expositor Office, organizers of the Harvest Glory Days Community decorating contest, had evolved a judging criteria that, in addition to several categories, allowed for a handicap for larger communities on the basis that these would require more decorating to make a good show than would the smaller communities and when the handicap was applied, the communities were tied. Hence two winners.

This was the first year of the event and this unexpected finish has led The Expositor Office to determine that, next year, there will simply be two categories with a sign prize for the best Harvest Glory Days theme decorated small community and another sign prize for the best decorated larger community, without the handicapping. The signs are being produced with the generous cooperation of Beacon Images in Tehkummah.

Similarly, Spring Bay has one public building, the Spring Bay Community Hall which is cleverly decorated with a large hay bale that acknowledges the contest. Manitowaning has a number of public buildings (town office, health centre) which are all decked out nicely in the harvest theme.

Both communities decorated their town’s entrance signs and Manitowaning decorated several of its intersections as well.

Spring Bay has one year-‘round business, Buie’s Grocery, which outdid itself to decorate all around its front door entrance. In Manitowaning, almost all of the businesses there similarly have joined in the fun.

The Spring Bay 4-H Club is the champion of the competition in its community and they helped and encouraged virtually every home along the Highway 542 corridor as it passes through the village to decorate, as well as homes along the Perivale Road. As befitting a project in which a 4-H Club is involved, Spring Bay’s decorating begins with the farm gate at the Dawson farm on the village’s south end and ends with another decorated farm gate at the Noland dairy farm at its north end. Well done.

Similarly, in Manitowaning, a drive up and down the residential streets indicates the enormous level of buy-in by homeowners in this community too.

The community of Aundek Omni Kaning gets the honourable mention this year. Every public building is fancifully decorated in this community whose health centre staff were the first to take up the challenge and pledged to decorate, challenging other communities to do likewise. There are enough homes decorated in AOK to indicate the community’s interest. Of note is the consistent fall theme decorations on all of the small footbridges that span the small creeks and dips along the sidewalk that runs from one end to the other of AOK, paralleling Highway 540.

Good work and congratulations to Holly Anderson and Ann Marie Corbiere who were the champions of the decorating in AOK.

Two smaller communities did only one thing, but did it extremely well. Zhiibhaasiing First Nation focused on the “world’s largest powwow drum” at the community’s entrance. It is hedged by a large and colourful troop of scarecrows, all of them made by individual community members.

Similarly, Silver Water has gone all out to decorate its already handsome town sign, on Highway 540 at the village’s east entrance, beside its fire hall and adjacent to its historic one-room schoolhouse. Several homes along the highway in Silver Water have also joined in.

The Municipality of Northeast Manitoulin and the Islands deserves high marks for a consistent decoration of all of its public buildings and places (library, post office, town office, marina) in addition to a grand display at its new town sign near the swing bridge. Three of the town’s institutions, the Manitoulin Centennial Manor, Little Current Place and the MTA’s Welcome Centre have elaborate fall theme displays at their front entrances and a drive through town and up and down residential streets reveals some decorating gems. Downtown, have a look inside the Anchor Inn’s front entrance and, across the intersection, the Casson Dentistry Clinic also rose to the occasion.

This is similar to the Gore Bay displays where a group of community volunteers has laced cornstalks to the utility poles the length of downtown Meredith Street and the community hall is similarly decked out. Several downtown businesses have taken up the same theme, as has the municipal office.

The Township of Gordon/Barrie Island has its own local farm gate decorating event and the dozen or more of these in this rural township are well worth seeing, as is the colourful display at the front of the municipal office on Noble Sideroad which the municipality officially entered into the Harvest Glory Days event.

M’Chigeeng has some delights, notably Kenjgewin Teg Education Institute’s Ojibwe Immersion playground, located at the south side of the Ojibwe Cultural Foundation building. The MSS display is inside the school in the front foyer display case.

There is one particularly fine home display on Oak Hill Drive close to the Hill Street intersection in M’Chigeeng.

Kagawong has its own annual “spot the scarecrows” event, which goes on until October 30, so this should be part of any fall Island tour and several downtown businesses are beautifully decorated in the fall theme, notably The Chocolate Works and the adjacent home on the main street although many others, like the Maple Tree Inn, have also decorated for the season.

There are certainly individually decorated homes and gardens in Sheguiandah, Sheguiandah First Nation, Clover Valley Road, M’Chigeeng, on Digby’s Road in Big Lake and on Lakeshore Drive along Lake Mindemoya.

Williamson’s Hardware in Mindemoya is cleverly decorated to appear as a cornfield and there are other delights like this in the Hub Town, including the building that houses Kat’s Pet Supply and Stepping Stone Toys together with the adjacent home on Highway 551.

The Expositor Office is pleased with the high level of buy-in and enthusiasm for this first fall theme decorating event, especially since it was announced and promoted from a standing start beginning just over a month ago.

It’s clear that the two winning communities achieved that status, as did AOK as the runner up, because all of these places had local champions that promoted the project in their respective communities: the health centre staff in AOK, the 4-H Club in Spring Bay and the community Recreation Committee in Manitowaning.

Your community could similarly benefit as a contender next year with a local group or organization or any enthusiastic individuals championing the cause and making sure there is participation at as many levels as possible.

Thanks to all communities who participated, and the individual homeowners and businesses who chose to become involved.

Manitoulin is clearly the most decorated ever to celebrate harvest time this year and Island communities now have a solid basis on which to build on this theme in the interest of Island-wide community spirit. 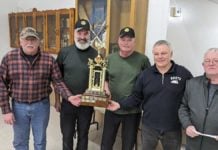 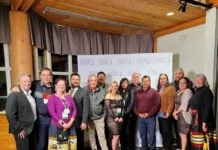 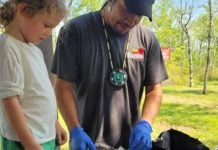