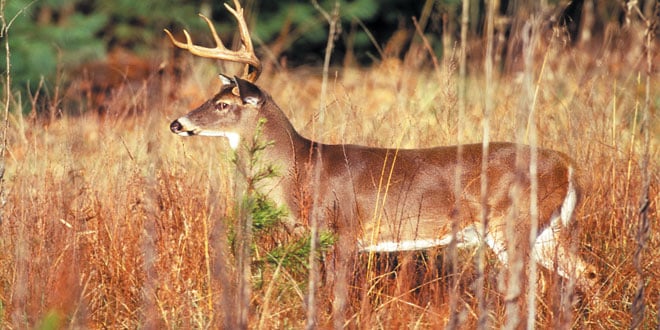 GORE BAY—A Gore Bay town official suspects someone has been illegally bow hunting for deer within the town limits and has contacted the Ministry of Natural Resources and Forestry (MNRF).

“My property backs on a  large lot behind us,” Mayor Lane told the Recorder. He explained that this past Saturday, “my son saw two men at the back of my property in hunter camouflage (clothes). Then  yesterday (Sunday)  I heard a noise in the bush behind my house, then I saw two deer going past, then  a couple of men in camouflage clothing about 40 minutes late coming out of the bush. I couldn’t see what they were carrying but the noise I heard sounded like an arrow either hitting the ground or a tree. I was cutting wood at the time when I heard the noise, which was loud. I couldn’t catch up to the men or I would have questioned them as to whether they were hunting.”

Mayor Lane noted, “if they were hunting it was well within the limit of 300 metres we have in our bylaw (that people can not discharge any type of firearm within 300 metres of a building; which is only allowed in three previously designate areas in the town for harvesting deer) on agricultural property. “Using a crossbow breaches our bylaw as well,” he said.

“Can I definitely say they were hunting, no I can’t, but it certainly looks suspicious,” added Mayor Lane.

George Purvis owns the adjoining property to Mr. Lane’s. Mr. Purvis told the Recorder,  “I can tell you I had some men survey my property to see what there is in terms of deer on my property.  They saw a total of 60 deer, four bucks and 54 does on my 20 acres of property. If there are 60 deer there,  no doubt there is at least another 60 deer in town.”

“As the population increases every year, next year we will have close to 200 deer in town and 400 the next year,” said Mr. Purvis. He said, “council needs to do something. We have a major problem with deer in town.”

As reported in last week’s Recorder, the town of Gore Bay general government committee is going to recommend to council that council request that additional hunting permits be provided by the province to hunt deer, in the three locations where these permits are already provided, as one of the ways to decrease the deer population in town.