MINDEMOYA—If buildings could talk, they would have fascinating stories, who came and went, who married and built families with children who grew up within their walls. The sum of their stories would weave histories of their community. In the houses of Mindemoya people like the blacksmith, mechanic, doctor, carpenter, baker, butter-maker, and general storekeeper made their living and raised their families. There is the old hospital, where generations came to heal, the churches where they worshipped, the post office and telephone exchange where they kept in touch with the world, general stores stocked with all manner of goods.

On May 18, International Museum Day, some of Mindemoya’s buildings found a voice in the person of Pat Costigan, who led a walkabout of part of the village. She called it Jean’s Walk, a nod to the late Jean Williamson, who was one of her relatives by marriage and a founder of the Central Manitoulin Historical Society. This was Jean’s Walk Part 1, starting at Our Lady of Canada Catholic Church and ending at the main corner.

Pat Costigan, a retired teacher, spends her summers on Manitoulin. She didn’t grow up in Mindemoya, but her interest in local history led her to volunteer as curator for the Central Manitoulin Historical Society and to research the village buildings. In the walk, she shared her knowledge, how the houses came to be built, the families and connections between the families in this small community.

The day of the tour was sunny and pleasant, and more than a dozen people came. Most had connections with the village, some grew up here, others had local relatives. One was a medical student staying in the big house built by John Caddel, bought by butter-maker Hugh Lochead in 1930.

Along the way, Ms. Costigan talked about Dr. Robert Davies, a surgeon who built a private hospital in Mindemoya, the first hospital on Manitoulin Island, in 1919. It later became the Red Cross Hospital. In 1972 the new hospital was built and the building was converted to offices and apartments.

Ms. Costigan, nee Williamson, knows a great deal about the histories of the buildings on the tour, but the D.A. Williamson & Sons Hardware Store is special for her. David Williamson, known as “Davy,” started this business in 1921, selling wood heating box stoves as well as general hardware. Over the years it grew. The Up Top Sport Shop was added in 1981. Two of Davy’s grandchildren are now carrying on the family business.

Visitors to the Welcome Centre and Pioneer Museum in Mindemoya can pick up a free pamphlet to take their own “Jean’s Walk,” or people can purchase the 48-page booklet ‘Your Guide to Jean’s Walk: An Historical Walking Tour Part 1’ for a small cost. The booklet has photos courtesy of Vivian Rattray-Eaton and from the Historical Society archives, with histories compiled by volunteer curators Ms. Costigan and Norma Hughson.

Ms. Costigan’s audience was enthusiastic. When they asked when Part 2 of the tour would be ready, she understandably hesitated. These projects are a lot of work and Central Manitoulin is lucky to have such dedicated volunteers. 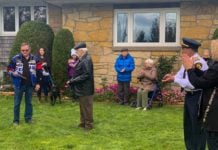