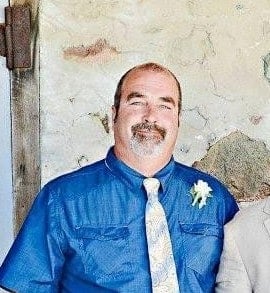 TIMOTHY JOSEPH BATTE
“Tim”
November 17, 1961 – May 30, 2021
Timothy Joseph Batte of Mildmay passed away suddenly at home on Sunday, May 30, 2021, in his 60th year with his beloved partner Rebecca Stein by his side. Tim was a loving father to Jessica Batte and a respected step-father of Tyson (Mikayla) of Walkerton, Ethan (Michaela) of Leamington and Curtis (Jenelle) of Innisfil. He was an adored “Papa Tim” by his grandchildren Annabelle, Jacob, Etta Jean and Remi Mae, and a faithful, loyal companion to “Buster.” Timothy was predeceased by his parents Edward and Christine (nee Voisin) Batte and will be deeply missed by his siblings Dennis (Carol) of Belmore, Robert of Teeswater, James (Marianne) of Teeswater, Richard (Darlene) of Mildmay, Catherine of Waterloo, Michelle (Darren) of Mildmay and Joseph (Yvonne) of Walkerton. Tim will be fondly remembered by the Weber family and by his loving nieces, nephews, and great-nieces and nephews. Tim was a well-known neighbourhood businessman and devoted his entire career to the farming industry and the farming community. He was known to be very dependable and hardworking. He made friends easily with his quiet manner, quick wit and soft grin. Tim will be remembered fondly for his chuckle, his gentle demeanour, sense of humour, infectious smile and sparkling blue eyes, but most of all for his love and admiration for his ‘Becca’ and family. Tim impacted everyone he met, and he will be missed dearly by all who knew him or had the honour to meet him. A funeral service was held privately at Cameron’s on Monday, June 7, 2021 at 11 am with Rev. Michael Anderson officiating. Tim’s service was livestreamed through his memorial page at CameronFuneralHomes.com. Interment at Immaculate Conception Cemetery, Formosa. As expressions of sympathy, donations to Community Living-Walkerton & District or donations to St. Mary’s General Hospital Foundation, Kitchener, in Tim’s name will be directed to cardiac initiatives. Cards available at Cameron’s (519-881-1273). Donations and condolences may also be made online at CameronFuneralHomes.com.