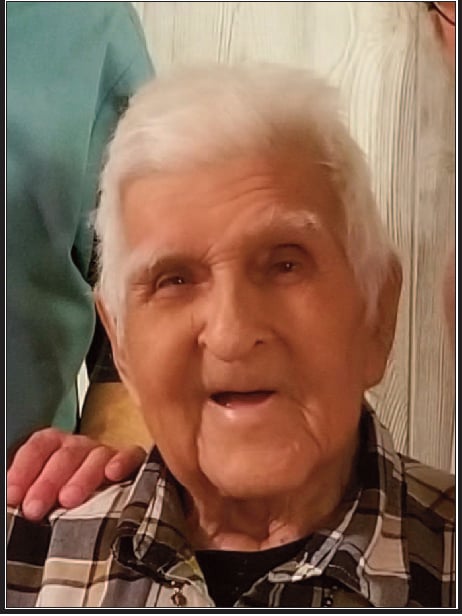 In loving memory of Alphonse Ignatius Trudeau, 94 years of age, who passed away peacefully on January 2, 2023, at the Manitoulin Health Centre, Little Current, Ontario. Eldest son of the late Ignatius and Olive Trudeau, he was born February 2, 1928. Cherished father to Victoria (Bert), Jean Oshkabewisens (Grant) and Ronnie (Rita). Special father to Melinda, Delores, Verna and Laurie. Special neighbour Carol Recollet. Cherished grandfather to Michael, Faron, Nikki (baa), Leslie baa, Leonard, Robin, Angelina and Clinton. Chi Papa to Kobe, Jonas, Summer, Simran, Cohen, Sirena, Leeda, Kate, Noah, Scott Jr., Kane, Leonidas, Chi Ton and others. Godfather to Rosetta Toulouse. He is survived by his siblings Victor (Dorothy) and Elizabeth. Predeceased by siblings Rose Toulouse (Victor), Isadore (Josephine), Stella McGraw (Smitty), Maxie (Loretta), Randy (Maureen). Alphonse was a contributing member to the community of Wikwemikong in the capacity of fire protection, having served as Fire Chief for 30 plus years before retiring. He had received a lifetime achievement award from the Anishnawbek Nation (Union of Ontario Indians), as well as receiving recognition from the Ontario Native Firefighters Association. He also worked for the Wikwemikong Public Works Department as water delivery person for many years. In his younger days, he worked in various lumber camps as a river driver and log cutting. His contributions to the community also included serving as a Housing Committee member, Wikwemikong Development Commission Board of Directors, served as a Band Councillor, Nursing Home Board of Directors and the Islands Claim committee. Alphonse maintained his sobriety for 56 years and celebrated his “Sobriety Birthday” this past November 5, 2022. He assisted the late David Osawabine with creating an Alcoholics Anonymous group in Wikwemikong. He was an avid fan of the Montreal Canadians and the Toronto Blue Jays. He had the opportunity to see his favourite hockey team play, when his son Ronnie took him to a game in Toronto many years ago. He will be remembered for his humility and kindness, wisdom, gift of storytelling and his mischievous sense of humour. He enjoyed working, fixing things and being out on the land. Alphonse lived life simply and always placed his trust in God and encouraged his family to do the same. Baamaapii ka waabmigoo aapchi-gii zhaagigo. Visitation started Thursday, January 5, 2023, at Buzwah Church. Funeral Mass was Saturday, January 7, 2023, at 11 am at the Holy Cross Church. Cremation followed. In lieu of flowers, the family is requesting donations be made to the new Wikwemikong Nursing Home in Alphonse’s name. Arrangements entrusted to Lougheeds/Jackson & Barnard Funeral Home.