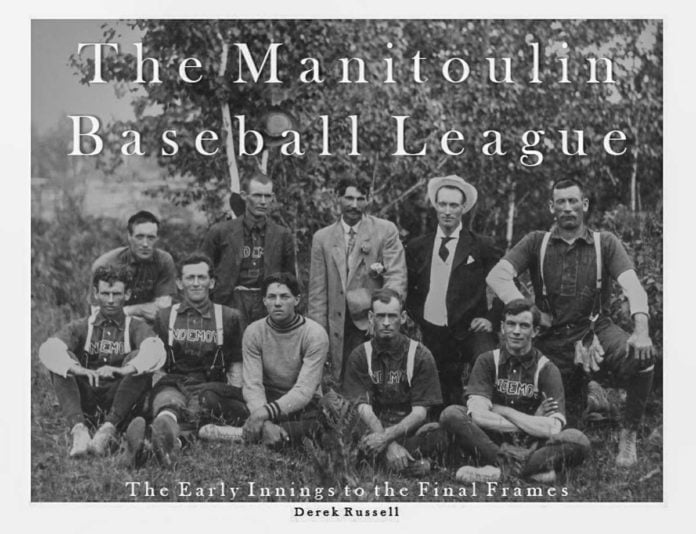 “The Manitoulin Baseball League started officially in 1903, the same year as the first World Series (in major league baseball) was played,” stated Derek Russell, who was born in Little Current and grew up in Espanola. “Our family is from Tehkummah, having lived there for the past 150 years.”

“I love baseball and the history of the game, and I had heard about all these great players on the Island,  some who played in the minor leagues and some in the majors, including Murray McDermid and Ken MacKenzie,” said Mr. Russell. “My dad (Eric) played for Mindemoya in the 1960s and my grandfather had played for Tehkummah. So, three years ago I decided to look into all of this and work on a book.”

“I visit the Island every summer,” explained Mr. Russell, who said he searched microfilm archives in libraries and museums in Toronto of The Manitoulin Expositor and Manitoulin Recorder where he found articles, photos and statistics. “Doing my research using microfilm was time consuming and tedious, but it was all worth it.”

Mr. Russell told The Expositor he found the Farquhar trophy (which was handed out to the Manitoulin Baseball League champion for many years) in the Providence Bay arena a couple of years ago. “It was in a trophy cabinet in the back. It was one of five major trophies in total that were presented to the Manitoulin Island champion every year. The Farquhar trophy was handed out to the champions during the heyday of the Manitoulin Baseball League, in the 1950s.”

“The book begins in the early 1900s when baseball as we know it today was still in its infancy and ends with the league’s final season in 1970, and in many ways is as much a history of the Island and the game itself as it is about the league,” said Mr. Russell.

Mr. Russell said, “although only Gore Bay, Little Current, Manitowaning and Providence Bay participated during the first few years of the league’s existence there was a lot of enthusiasm around the game, so much so that in 1903 a league trophy was donated by A.E. Dyment, MP for Algoma. In the years that followed, however, as the game faded in and out of popularity and communities opted in and out of participating, the league took on various forms with varying success. It wasn’t until after the First World War when Beniah Bowman, MPP for Manitoulin, donated a new league trophy that the league grew to include many of the Island’s smaller communities, including Mindemoya, Silver Water, Snowville, Spring Bay, West Bay and Wikwemikong.”

“There were many great ball players who played in the league during that period, including George Boyd, Francis Debassige and Alex Ticks, to name a few,” said Mr. Russell. “Some highlights during those years include Little Current playing Cooper Cliff for the Nickel Belt pennant in 1923 and Mindemoya advancing to play Falconbridge in the Northern Ontario playoffs in 1933.”

“It was after the Second World War, however, when enthusiasm for the game on the Island reached an all-time high, and the Bowman Cup, first introduced in 1921, was replaced by the Farquhar trophy at the start of the 1948 season, which was donated by Thomas Farquhar, MP for Algoma East. In the years that followed the Manitoulin witnessed some of the best baseball ever played on the Island, thanks in part to the pitching of Little Current’s Allan Little, Providence Bay’s Bruce Irving and Murray McDermid, both of whom would go on to spend some time playing in the minors, and of course Gore Bay’s Ken MacKenzie, who would go on to have a career in the major leagues.”

Mr. Russell explained, “the book is 444 pages in length, and chronicles each year of the league’s existence, as well as numerous exhibition games that took place both on and off the Island, and includes many photographs, articles from the Island papers and some firsthand accounts.”

He said the book is in three parts, from 1903-1920, the 1940-1960s and the final few years of the league. The book provides year by year statistics, standings and box scores of games, and newspaper clippings. “The reality is that when I first finished the book it was twice the number of pages, but I thought it was a little too big, so some seasons have been condensed. But for the 1950s as an example with Ken MacKenzie and Murray McDermid playing we put in the full season-the results of every game and the playoffs.”

“There are quite a few photographs in the book (team pictures, for example), but not as many as I would have liked. But I tracked down every photo I could from newspapers, museum and historical societies,” said Mr. Russell.

By the way, the front cover of the book is of the Mindemoya team from 1910.

“The league folded in 1970 due to a lack of interest,” said Mr. Russell. “There were more major league games being shown on television and amateur leagues were folding everywhere.”

“I like to joke that this book will settle which community had the best team overall,” quipped Mr. Russell. He said the Little Current team won the first league championship, and Gore Bay won the championship in the final season of the league. Mindemoya was also another community that had a really good ball club over the years, he said.

“I just hope people will enjoy the book and I hope I have everything right in terms of names, players statistics and locations. I made a real effort to make sure all the names and statistics were right,” added Mr. Russell. “I left no stone unturned in my efforts.”

“When I wrote the book I did so without any bias,” quipped Mr. Russell, adding that his mother is from Gore Bay, his father is from Tehkummah and that he is originally from Little Current.

The book, which retails for $45, will be sold  at The Manitoulin Expositor book store in Little Current.