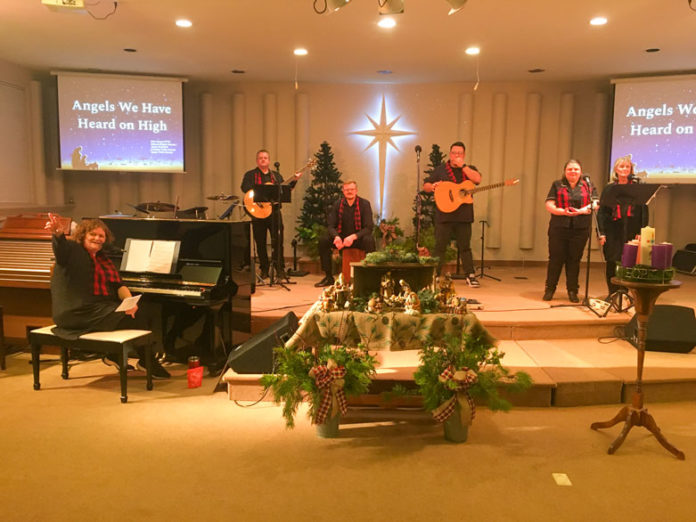 MANITOULIN—Sunday evening, November 27 was a triple threat benefit for Manitoulin Island: a dozen clergy, representing that number of Protestant churches and denominations on Manitoulin, organized a Christmas carol sing-along event with the goal of augmenting the Manitoulin Family Resources (MFR) food bank’s resources.

The event, held centrally at Freshwater Community Church in Mindemoya, was organized by the Manitoulin Ministerial group as both a unique ecumenical event and to benefit the MFR. It was successful on all counts as the crowd that filled the sanctuary (and later feasted on tea and treats) provided food donations sufficient to over-fill four large shopping carts by way of the voluntary price of admission. And on that first Sunday of the Advent Season, the eight classic Christmas carols the large congregation sang more than filled the air with a joyful sound.

Accompanist, event emcee and Manitoulin Community Church Pastor Ramona Jaggard also provided a spirited solo rendition of ‘What Child is This’ to much applause.

In addition to Pastor Jaggard (whose enthusiastic piano accompaniment through the program set the tone for the congregation of singers), the pastoral band included Pastor Josh Wilhelm of Freshwater Community Church on drums, Pastor Jamie Greenwood of Spring Bay Pentecostal Church on bass guitar, Pastor Jason Snider of Northern Life Church (Little Current) on rhythm guitar and, on vocals, Pastor Dawn Dawson from Providence Bay Community of Christ Church and Reverend June McDougall from Manitowaning’s Knox United Church. In addition to their instrumentation, all band members lent their voices for musical leadership.

There were other clergy involved as well, but behind the scenes, as Reverend Janice Frame from St. Andrew’s United Church in Silver Water was a front-door greeter (with Reverend McDougall), Paster Joel Lock from Island Community Church in Kagawong and Anthony Pennings from the AOK Fellowship were the ushers and refreshments after the singalong were served by Gail Cronin, Licensed Lay Leader from Little Current United Church and Pastor Lock.

Pastor Wilhelm, as the minister for the church that hosted the event, in his opening prayer acknowledged “the coming together of all the various churchs and denominations on Manitoulin for fellowship and for a common cause.” Similarly, in her benediction prayer at the close of the event, Pastor Jaggard offered thanks, “for this time together and for the unity of the Island pastors.”

Pastor Joel Lock spoke to the congregants about the importance of the event in terms of supporting the MFR’s food bank, noting that all financial gifts over $20 merit a receipt for tax purposes and that electronic transfers of funds to MFR are also welcome. Visit the MFR’s website, www.mfresources.net and click on the donate button to do this.

He introduced Nikki Thompson, the MFR’s new co-ordinator for the food program.

Ms. Thompson thanked the attendees and the Freshwater Church for hosting the event, echoing Pastor Lock’s remarks about the importance of helping neighbours and also said that people can give their time, “the two weeks around December 12 requires lots of help to pack the Christmas hampers.” Ms. Thompson can be contacted at 705-368-3400, extension 242.

Ms. Thompson also reminded people that, last Christmas 1,015 Christmas hampers were filled and delivered and that, so far, MFR already has this number of requests and is expecting a further 200 in December.

Pastor Jaggard, playing, as she noted, on the sanctuary’s “shiny piano” recalled that as a young person when she took piano lessons from Holly Scott, the lessons were given on an older instrument in the church’s basement.

“But every so often,” she recalled publicly, “it was great to come upstairs and play on the shiny one.”

In a remark addressed to Ms. Scott, who was in the congregation sitting close to the front, Pastor Jaggard observed, to applause, “it’s nice to be playing it tonight, Holly.”