﻿WHITEFISH FALLS—This year’s edition of the La Cloche Art Show is very much a family affair, with Little Current artist Cliff Jewell not only taking home Best of Show and a first place in the oil category, but his granddaughter Georgia Roy secured a second in the elementary category and grandson Joey also had a piece in the juried show—quite the family accomplishment.

For artist emeritus Ivan Wheale, co-founder of the La Cloche Art Show, the annual event is something of a homecoming where he gets to meet up with many old friends and make new ones. This year was especially poignant given the show has been on hiatus for the past two years due to the pandemic.

“I look around now and see all of the artists here and realize it was a good thing that we did,” said Mr. Wheale of the founding of the La Cloche Art Show with the late Peg Forbes.

Mr. Wheale announced the winner of the Ivan Wheale Award to Linda Finn for her mixed media work ‘Ark Types’ and the Peg Forbes Award to Michelle Fleming for her oil painting ‘Near Birch Island.’

Art show patron Patricia L. Meehan, an Ontario Legal Aid lawyer who specializes in child protection and family law, presented the Patricia L. Meehan Award to Lily Simon of Little Current Public School for her paperwork ‘Dream.’ Ms. Meehan noted that she was honoured to be allowed to pick the recipient of the award that she sponsors personally.

The list of this year’s award recipients included: acrylic: first, Cliff Jewell for ‘Chute in Fall.’ Second to Beth Bouffard for ‘Cypripedium’ and honourable mentions went to Beth Bouffard for ‘Timing is Everything.’ Drawing: 1st, Astrid Colton for ‘Fox Kit,’ second place went to Susan Lampinen for ‘Whiskers’ and honourable mention to Martin Kotyluk for ‘Dad’s old tools.’

In oil, first place went to Laurel Price for ‘Bent but not broken,’ while second place went to Mark Hope for ‘The Blossoms’ and honourable mention was made of Michelle Fleming’s ‘Iroquois Bay toward Baldy.’

In pastel, Beth Bouffard took first place for ‘The Golden Hour,’ while second place went to Donna Kanerva for ‘View to Manitou’ and honourable mention when to Sally Assinewai for ‘Waiting for breakfast.’

Distinguished Artists for the 2022 season were Penny Bois and Sharon Preen. Ms. Bois’ ‘Emotion’ and Ms. Preen’s ‘A Little Bit of Magic’ are being raffled to raise funds for the show. Both artists gave workshops prior to the Thursday evening opening reception of the show. Sadly, the traditional wine and cheese get-together had to be forgone this year due to caution induced by the ongoing COVID-19 pandemic.

Best of Show and Oil winner, Mr. Jewell, who took up painting following his retirement from the Rainbow District School Board, said he was especially overjoyed this year when his grandchildren also had pieces accepted for the show, Georgia and Joey Roy.

In 2007, to commemorate the 30th anniversary of the La Cloche Art Show, Ivan Wheale, co-founder of the art show, was honoured with the title “Artist Emeritus.” His art is the highlight of the show each year and but is not included in the jury process (rumour has it he wanted other artists to have a crack at the awards). Mr. Wheale has held over 94 solo exhibitions including three touring exhibitions circulating in Ontario, including a 50-year retrospective held at the Centennial Museum of Sheguiandah. His work has been included in over 75 group exhibitions.

This year’s Ivan Wheale pieces on display at the show are: ‘Lichen in McGregor,’ ‘The Mighty Pine’ and ‘Rocky Shore.’

The La Cloche Art Show runs until July 9 and is open from 11 am to 5 pm daily. 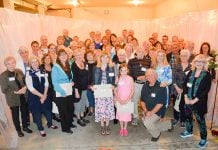