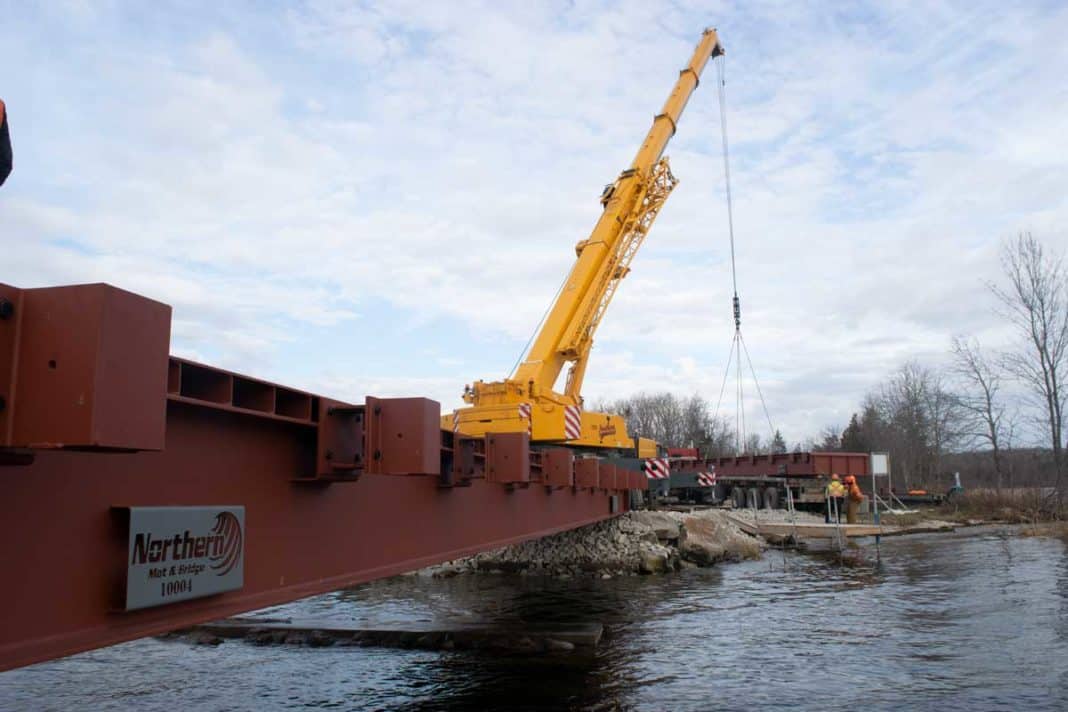 ﻿THE SLASH—Assiginack and Tehkummah are once more reunited across the waters of Rogers Creek after crews installed the bridge spans on Lakeshore Road last week, ending the saga of the deteriorating bridge that has not seen vehicle traffic since 2015.

“It’s great to see this,” said Assiginack Mayor Dave Ham as work crews gathered around the bridge materials on the Assiginack side of the road last Tuesday, November 10.

“This has been a bridge over troubled water,” he said, adding that Assiginack ratepayers living near the bridge were relieved that a solution had finally arrived for the contentious creek crossing.

Lakeshore Road was once the principal route between South Baymouth and Manitowaning before there was Highway 6, Mayor Ham recalled. Bridges have stood over Rogers Creek since the late 1800s.

The Rogers Creek bridge is situated on the dividing line between the townships of Assiginack and Tehkummah and each shares a portion of its annual maintenance needs.

In 2015, Assiginack council received an engineer’s report about the state of the bridge. At the time, Tulloch Engineering listed the upper structures of the bridge as ‘fair’ but its report found the core structural components such as curbs, railings, abutments and bearings were in poor condition. The condition of the bridge has reportedly been questionable since 2007.

Both councils drafted resolutions to temporarily close the bridge to vehicular traffic in 2015. Since Lakeshore Road connected with other roads at each end, the bridge was not a critical structure; instead, it was more of a nuisance by having to detour around the bridge to reach adjacent properties.

At the time, estimates to replace the bridge reached as high as $700,000 but area residents Jim Mortimer and Andy Bowerman suggested that the townships could install a pre-fabricated bridge for less than $100,000.

Little movement happened on the file until earlier this year, when engineer Tim Lee of Northern Mat and Bridge approached the township with an unsolicited suggestion of a similar modular bridge. In his suggestion, the bridge could lay atop the existing structure with all of its weight supported at either end, thereby eliminating the need for permits for in-stream work.

On August 4, Tehkummah council approved an agreement in principle to move forward with the Northern Mat and Bridge replacement option, estimated around $100,000; Assiginack followed shortly thereafter.

Just three months later, township public works crews from both municipalities assembled on the Assiginack side of the bridge to help install the replacement spans. The ultimate decision was to remove the existing structure and install new abutments on each end to support the new metal crossing.

In the early afternoon, a driver backed the two bridge halves down Lakeshore Road atop a flatbed truck trailer. Once in place, a mobile crane lowered them to the ground for crews to install the necessary attachments. Then, it hoisted each 34,350-pound segment over the creek while crews on both sides eased it into place—within an inch of tolerance.

Assiginack crewmember Steve Wood, who was guiding the bridge down on the Tehkummah side, was the first person to use the bridge when he ran across to grab a tape measure to verify its placement.

Taking a front-row seat on the Tehkummah side were Perry Chatwell and his 96-year-old father Raymond Chatwell. The two have lived in the area all their lives and were pleased to see the return of this connecting link.

Mr. Lee, the engineer who had submitted the unsolicited suggestion to install such a bridge, was there to oversee the project. His company, Northern Mat and Bridge, is the exclusive Eastern Canada distributor of these bridges, manufactured by Lessard Welding in Sudbury. Also observing was Dan Duke of Duke Engineering, which had consulted on the bridge.

“It’s a beautiful bridge and it’s nice to see it in,” said Tehkummah roads superintendent Kevin Dunlop, whose crews were helping with the project to reduce taxpayer costs. “It went smoothly and for about a third of the cost.”

Vehicular traffic did not flow over the bridge immediately. Mr. Dunlop said crews still had to install guardrails and ballast walls, as well as smoothing the roadbed onto the bridge approaches. He estimated at least a week for that process.