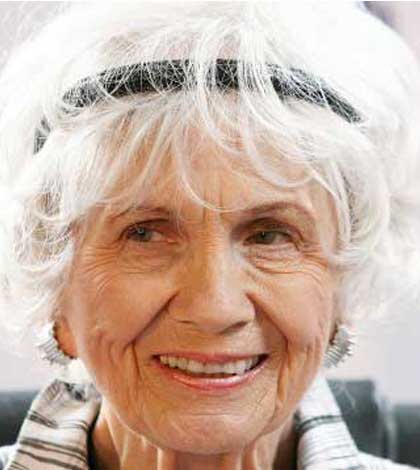 What good news for Canadians last week when Alice Munro was announced as the winner of the Nobel Prize for Literature.

Ms. Munro’s name has been on the Nobel list for several years and the judging committee in Stockholm this year decided that it was her turn, notably crediting her with her mastery of the difficult short story genre.

Ontarians in particular, especially those of us who live in the rural parts of our province, should be pleased with the choice of Alice Munro as the winner of the world’s premiere literary award, for it is about us that she writes.

Ms. Munro was born in the Southern Ontario community of Wingham and lived as a young married woman in the town of Clinton, which is located just south of the Lake Huron community of Goderich and not far from Perth’s County town and Canada’s classic Shakespearean festival capital, Stratford.

This, then, is the rural area, Huron and Perth Counties, that forms the backdrop for Ms. Munro’s tightly focussed and wonderfully crafted short stories.

Ms. Munro’s focus is on female characters but for the people of Manitoulin Island, and especially those of European descent, she is writing stories about us, often with the backdrop of our same Lake Huron and the issues that are endemic to all small, rural Ontario communities.

If Ms. Munro had been brought up in and lived as an adult in, say, the Ottawa Valley and had written about people’s experiences there, her honour would certainly be no less significant to Canadians but her subject matter, and especially the landscape of her literature, would not be quite as relevant to our part of the world as is the Huron and Perth Counties and Lake Huron that backdrop her exquisite stories.

Assiginack librarian Debbie Robinson is quoted in a news story about Ms. Munro’s honour in the paper this week as saying the new Nobel laureate’s books remain consistently popular choices by her patrons.

As long as Ontario has small towns that in turn produce and inform small town people, Ms. Munro’s work will have an audience.

Her genius is timeless, as are her themes.

They are our stories.