MANITOULIN – While there is no overall consensus among Manitoulin Municipal Association (MMA)  municipalities yet as to whether they are in favour or against an earlier proposal for the Swing Bridge to be opened every two hours instead of the current one hour (to accommodate boating traffic), the North Channel Marine Tourism Council Inc. (NCMTC) has made it clear they are opposed to any change being made.

The issue was raised and discussed by members at an NCMTC meeting last week with a motion passed that the NCMTC supports maintaining the status quo at the Little Current Swing Bridge.”

Stan Ferguson, chair of the NCMTC told The Expositor “From our perspective, opening the bridge to the North Channel every two hours instead of every hour will deter boaters. It would definitely affect boat traffic. Plus, if it was every two hours we don’t see where there would be an advantage and cut down on traffic wait times at the bridge. It would just mean vehicle traffic would have to wait that much longer for more boats to go through. It wouldn’t allow (vehicle) traffic to get through quicker.”

“We have seen times when vehicle traffic has been backed up to Highway 540 even when the bridge is open every hour,” said Mr. Ferguson. “Imagine the backup if this was every two hours. The best solution would be to have the new proposed bridge constructed. Pressure needs to be put on the province to get the new two-lane bridge in place. We don’t need to put up any more barriers for boaters. The municipal leaders should be putting pressure on the province to get the new bridge construction going.”

“The answer to all of this is getting the new two-lane bridge built and the MMA  should be putting pressure on the government to get this going and not let it fall off the radar,” said Mr. Ferguson.

At a Manitoulin Municipal Association (MMA) meeting last week chair Ken Noland said “At our last meeting the issue was to be brought back to individual municipalities to discuss if they feel we should consider approaching the authorities to consider a two-hour (instead of the current one hour) opening of the bridge for boat traffic.”

Chair Noland explained that Central Manitoulin has passed a motion in favour of the two-hour opening, while council for the Town of Northeastern Manitoulin and the Islands (NEMI) is opposed to making the proposed change.

“At a council meeting, Billings made the decision we are in support of NEMI and their concerns on this and to have the current one-hour opening in place,” said Ian Anderson, Billings Mayor.

Hugh Moggy an Assiginack township councillor said, “Our council hasn’t made a formal decision but we are against changing this.”

Gordon/Barrie Island Reeve Lee Hayden told the meeting, “Our council decided in favour of having work done to explore what would be involved in changing the bridge opening time from one to two hours. No motion was passed by council but we favour exploring the idea at least.”

Gore Bay council will be discussing the issue at its meeting in November, said councillor Kevin Woestenenk.

Dave Jaggard, Reeve of Tehkummah Township told the meeting, “This issue has not come up at a council meeting, but seeing what NEMI has said we will probably go along with what they decided.”

“Our township (Burpee-Mills council) felt that the idea was worth exploring,” said Mr. Noland.

Tim Mackinlay, a member of the Robinson Local Services Board (LSB) said that the board has a meeting on October 25th and this issue will be put on the agenda for the meeting. 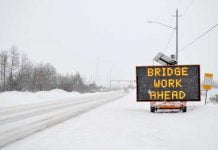